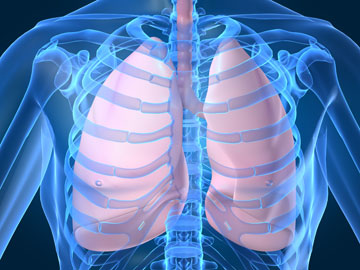 – Chronic obstructive pulmonary disease (COPD) takes an enormous toll in human suffering and medical costs. More than 30 million Americans battle with frequent coughing, increased breathlessness, wheezing, and the other symptoms of the progressive lung disease.
Most COPD patients have to take medications every day. As a result, inhaled drugs for COPD, such as Spiriva, have become blockbusters, bringing in billions of dollars a year in revenue.
These particular drugs work by opening up airways in the lungs to make breathing easier. Unfortunately, the so-called bronchodilator drugs currently on the market have limitations, says Dr. David A. Edwards, Professor of the Practice of Idea Translation at Harvard University. “The main problem is that they are not very efficient at delivering drugs to the lungs,” he explains. Much of the drug sticks in the mouth or throat rather than getting to the lungs where it is needed. In addition, says Dr. Edwards, “the fact that the drugs remain in the mouth and throat can lead to serious side effects.”
Which is why a number of companies have been working on innovative new approaches to increase the efficiency of drug delivery. “One particularly promising idea, being developed by Pulmatrix, Inc. [NASDAQ: PULM], is to attach drugs to small particles that can ‘fly’ far more easily into the lungs,” says Dr. Edwards. Such advanced “dry powder” technology can deliver three to 50 times more drug to the lungs compared to current inhalers, while dramatically reducing the amount stuck in the mouth or throat. “It’s like a pill for the lungs,” he says.
Pulmatrix is now developing an inhaled bronchodilator product for COPD that combines the active ingredient found in Spiriva with its proprietary dry particles. Clinical trials show that the product is five times more efficient at delivering the drug to the lungs than the currently marketed alternatives.
“That should bring both good efficiency and fewer side effects — offering important benefits to COPD patients,” says Dr. Edwards.